The mission of the Naomi Ruth Cohen Institute for Mental Health Education is to reduce the stigma of mental illness that has been a barrier for individuals, families, and communities receiving much-needed support. The institute aims to provide resources and hope to those that struggle with mental illness, and to those who support them.

The Naomi Ruth Cohen Institute for Mental Health Education strives to educate people on mental health issues through various outreach programs, as well as our annual conference, which is the highlight of our year. 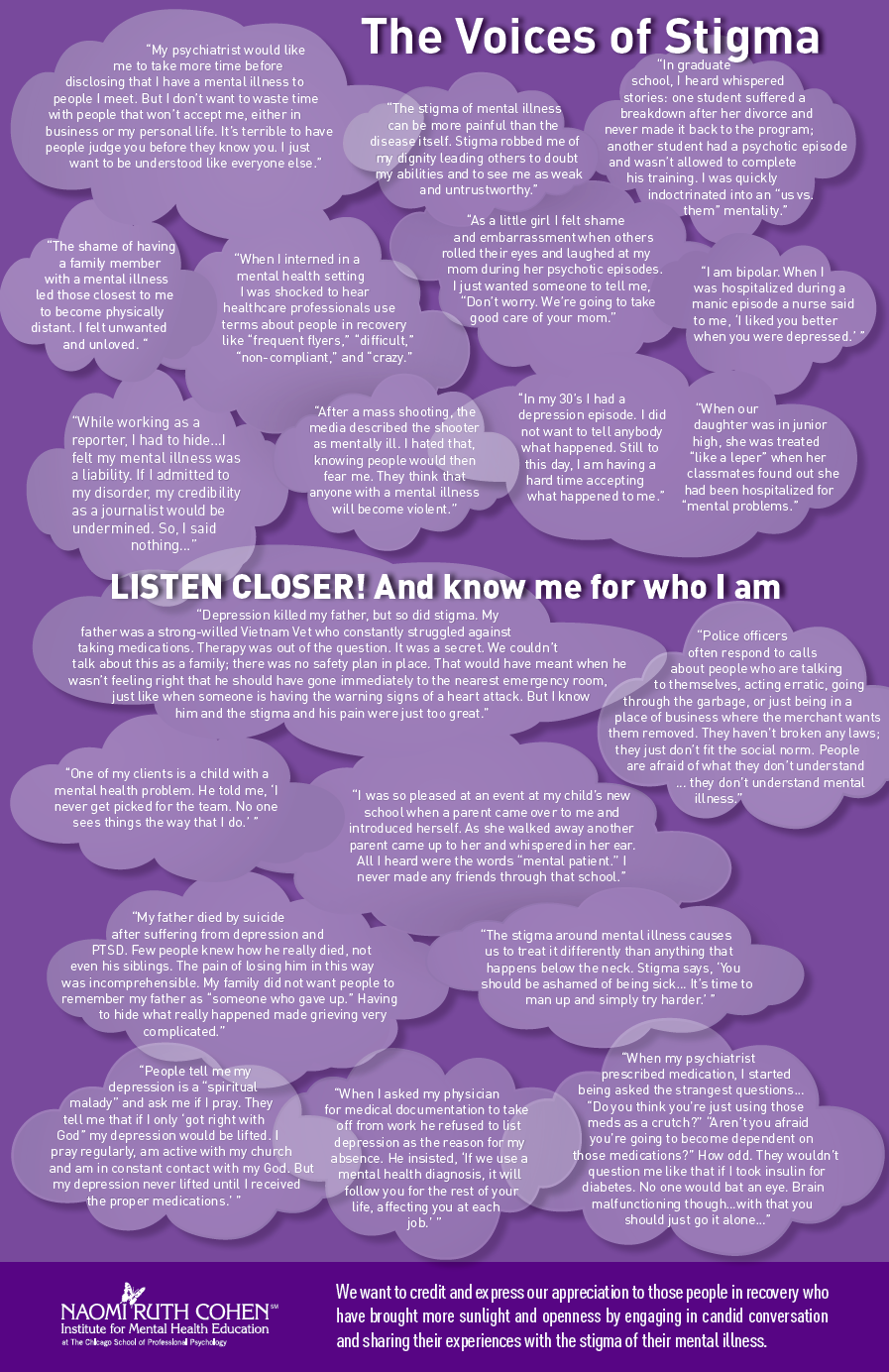 “My psychiatrist would like me to take more time before disclosing that I have a mental illness to people I meet but I don’t want to waste time with people that won’t accept me, either in business or my personal life. It’s terrible to have people judge you before they know you. I just want to be understood like everyone else.”

“The stigma of mental illness can be more painful than the disease itself. Stigma robbed me of my dignity leading others to doubt my abilities and to see me as weak and untrustworthy.

“In graduate school, I heard whispered stories: one student suffered a breakdown after her divorce and never made it back to the program; another student had a psychotic episode and wasn’t allowed to complete his training. I was quickly indoctrinated into an “us vs. them” mentality.”

“The shame of having a family member with a mental illness led those closest to me to become physically distant. I felt unwanted and unloved.”

“When I interned in a mental health setting I was shocked to hear healthcare professionals use terms about people in recovery like “frequent flyers,” “difficult,” “non-compliant,” and “crazy.”

“As a little girl I felt shame and embarrassment when others rolled their eyes and laughed at my mom during her psychotic episodes. I just wanted someone to tell me, “Don’t worry. We’re going to take good care of your mom.”

“I am bipolar. When I was hospitalized during a manic episode a nurse said to me, ‘I liked you better when you were depressed.”

“While working as a reporter, I had to hide…I felt my mental illness was a liability. If I admitted to my disorder, my credibility as a journalist would be undermined. So, I said nothing…”

“After a mass shooting, the media described the shooter as mentally ill. I hated that, knowing people would then fear me. They think that anyone with a mental illness will become violent.”

“In my 30’s I had a depression episode. I did not want to tell anybody what happened. Still to this day, I am having a hard time accepting what happened to me.”

“When our daughter was in junior high, she was treated “like a leper” when her classmates found out she had been hospitalized for “mental problems.”

LISTEN CLOSER! And know me for who I am:

“Depression killed my father, but so did stigma. My father was a strong-willed Vietnam Vet who constantly struggled against taking medications. Therapy was out of the question. It was a secret. We couldn’t talk about this as a family; there was no safety plan in place. That would have meant when he wasn’t feeling right that he should have gone immediately to the nearest emergency room, just like when someone is having the warning signs of a heart attack. But I know him and the stigma and his pain were just too great.”

“Police officers often respond to calls about people who are talking to themselves, acting erratic, going through the garbage, or just being in a place of business where the merchant wants them removed. They haven’t broken any laws; they just don’t fit the social norm. People are afraid of what they don’t understand … they don’t understand mental illness.”

“One of my clients is a child with a mental health problem. He told me, ‘I never get picked for the team. No one sees things the way that I do.”

“One of my clients is a child with a mental health problem. He told me, ‘I never get picked for the team. No one sees things the way that I do.”

“My father died by suicide after suffering from depression and PTSD. Few people knew how he really died, not even his siblings. The pain of losing him in this way was incomprehensible. My family did not want people to remember my father as “someone who gave up.” Having to hide what really happened made grieving very complicated.”

“The stigma around mental illness causes us to treat it differently than anything that happens below the neck. Stigma says, ‘You should be ashamed of being sick… It’s time to man up and simply try harder.”

“People tell me my depression is a “spiritual malady” and ask me if I pray. They tell me that if I only ‘got right with God” my depression would be lifted. I pray regularly, am active with my church and am in constant contact with my God. But my depression never lifted until I received the proper medications.”

“When I asked my physician for medical documentation to take off from work he refused to list depression as the reason for my absence. He insisted, ‘If we use a mental health diagnosis, it will follow you for the rest of your life, affecting you at each job.”

“When my psychiatrist prescribed medication, I started being asked the strangest questions… “Do you think you’re just using those meds as a crutch?” “Aren’t you afraid you’re going to become dependent on those medications?” How odd. They wouldn’t question me like that if I took insulin for diabetes. No one would bat an eye. Brain malfunctioning though…with that you should just go it alone…”

We want to credit and express our appreciation to those people in recovery who have brought more sunlight and openness by engaging in candid conversation and sharing their experiences with the stigma of their mental illness.