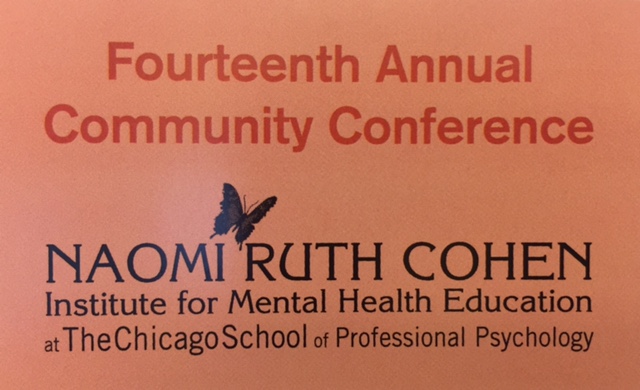 On June 7, we opened the doors of Beth Emet The Free Synagogue to welcome 290 attendees to our 14th annual Community Mental Health Conference. Tackling a subject we hadn’t before, we made the focus of this year’s conference stigma, and titled it Understanding and Overcoming the Stigma of Mental Illness.  We designed the conference to educate and inform about the stigma  surrounding mental illness, hoping to impart knowledge to help attendees not only fight stigma, but become advocates for change.
Described by one mental health professional who attended as “without a doubt, one of the very best I’ve ever attended,” the conference featured an opening session of powerhouse speakers including U.S. Congresswoman Jan Schakowsky (IL-9). A long-time advocate of mental health, Congresswoman Schakowsky discussed how as a member of Congress, she has fought for mental health parity, proclaiming, “The stigma and misunderstanding have contributed to the notion that access to mental health services is somehow not as important as other health services. In fact, approximately 60% of adults and almost one half of youth ages eight to 15 with a mental illness have received no mental health services in the past year.”
Illinois Institute of Technology Distinguished Professor of Psychology, Patrick Corrigan, Psy.D.; Depression and Bipolar Support Alliance National Chair, Reverend Cheryl Magrini, Ph.D.; and Law Enforcement and First Responder Suicide Prevention Trainer, Chris Prochut were the keynote speakers. In an auditorium filled to capacity, each speaker shared personal stories of living with mental illness and how they worked to overcome the stigma that so often surrounds it.
“The secret to changing stigma is to encourage and empower people with lived experience to tell their story,” said Dr. Corrigan, who has been hospitalized because of mental illness, and is now principal investigator of the National Consortium on Stigma and Empowerment, a National Institute of Mental Health-funded research center. “At the end of the day stigma is not an issue of medicine, it’s not an issue of psychology, it’s an issue of social injustice.”
Chris Prochut, dismissed from his position of police commander after finding himself in crisis from the stress of his job, took to the stage to tell his emotionally impactful story of losing his job and his sense of identity after being diagnosed with bipolar disorder. On the verge of suicide (“My world was dark and I was going to make everything dark around me”), he was forcibly hospitalized by his wife and former members of his department. Explaining how the stigma of mental illness is pervasive in law enforcement, Prochut told the audience that telling his story in his position as a suicide prevention trainer has provided encouragement to some police officers to seek the help they need. “Sometimes God surrounds you with people to hear your past so it doesn’t become their future.”

As each panelist took the stage to tell his or her story, Congresswoman Schakowsky’s assertion early in the program that few people with a mental illness feel comfortable sharing their story was proven correct. Each speaker acknowledged a reluctance to talk about their mental illness, to seek help. The acknowledgement, either intimated or told candidly, was evident in every story. Reverend Dr. Magrini, who has bipolar disorder and whose 23-year old son with bipolar disorder committed suicide, shared her emotional journey of suffering, finally seeking treatment and how self-care and introspection and learning to rely on family, friends, and her spirituality have all helped her.

The inspiring, day-long conference also included 36 exhibitors and 18 smaller discussion groups, which covered a range of topics, including how mental illness is covered in the media, military families dealing with stigma, keeping stigma around mental illness out of our schools, and laws and legislation addressing stigma. Each discussion group was led by professionals that shared expert knowledge, with many offering workable solutions, prompting at least one attendee to comment, “I have increased awareness of different types of stigma and how we as individuals and as a society can respond.”
When president of The Chicago School of Professional Psychology Michele Nealon-Woods, Psy.D. spoke to the audience, she stressed, “We can no longer understand health without the full integration of mental health.”
Here at the Naomi Ruth Cohen Institute for Mental Health Education, we strongly agree with Dr. Nealon-Woods’ viewpoint and it’s one of the reasons why we have the conference every year, and open it to the community. The conference isn’t just for mental health professionals, it’s for anyone affected by mental illness or anyone interested in mental health. As NRCI founder Larry Cohen said at the conference, “We’d like to think {that at} our institute we spread pebbles into the pool and they ripple around and affect the entire community.”
To hear the keynote speeches in full and the panel discussion that followed, click here and here. The panel discussion was moderated by Michael Horowitz, Ph.D., president of TCS Education System.
Click here for a copy of the conference brochure. Click here to download a copy of our Stigma Poster. If you have any questions, please feel free to call the NRCI office at 312.467.2552.